Matt Ritenour started working with California State University, Chico’s Advanced Laboratory for Visual Anthropology (ALVA) as a student in 2012. Since graduating in 2013, he has continued working with the lab, filming and editing documentaries that cover a wide array of topics. His most recent project—and his first as a director—is Impact of the Frolic, which won a Northern California-area Emmy Award on June 6, 2015. The documentary is a work of both auditory and visual storytelling, taking viewers through forests, over oceans, and across continents. It retraces archaeologist Thomas Layton’s discovery and research of an opium clipper that wrecked off the shores of Mendocino, California, in 1850, creating global connections that would change California forever.

How did you get started as a visual anthropologist?

So, I guess this my first job as an “official” director of a film. But I’ve been making films since I was a kid, and that’s what led me to ALVA—this passion for filmmaking. When I decided I wanted to go to college after high school—I went to a junior college for two years—I fell into studying anthropology and really loved it. But I thought, in the back of my head, “I wonder if I can make movies, somehow, while I’m studying anthropology?”

And how about ALVA, specifically?

I had no idea [how to look for college anthropology programs]. None of my parents went to college; I didn’t really know how to do it. So I just went on the Internet and started looking around, and I found a blog post from the Society of Visual Anthropology. They said that Professor Brian Brazeal at California State University, Chico was building this visual anthropology lab. It detailed all the equipment that he was trying to set up and it was unbelievable.

This is…maybe 2010? Nobody had a Red Camera in 2010. Nobody was giving undergraduates access to a Red Camera in 2010. It was huge. You would think a program like this would be at Harvard, or MIT, or UCLA, or USC. But I believe the best program for doing film is right here—or at least documentary film. So I just packed up and I came to Chico.

How did you go about forming the story around Impact of the Frolic?

This is the most fun I’ve had working on a film to date. We already had a really good story because we had Tom Layton’s books. I mean, this guy wrote two full-length books already describing all his research. What I wanted to do was mimic Tom’s book in its emphasis on a narrative—a good story—not just an explanation of the facts.

That’s what’s so compelling to me about this story; he found a couple potsherds in an archaeological site and it took him down a rabbit hole for like 20 years. It just took him so much time and effort and research to recover this thing that was totally forgotten, that no one had really pieced together yet. That’s why we wanted the film to feel like an investigation—take the viewer along the story with Tom Layton’s research.

Can you talk about some of the specific creative calls you made?

We didn’t want to do reenactments. Reenactments are not good. I didn’t want to have all these people dressed up in costumes…you know, it’s just not my thing. I don’t like seeing it, it takes me out of the film. It’s like if somebody started singing all of the sudden. No offense, if you like those kinds of films.

None taken! Professor Brian Brazeal mentioned—half affectionately, half seriously—that you ignored all of his filmmaking rules on this documentary. Your thoughts?

No, it’s not affectionate! He’s only laughing about it because it actually worked.

He mentioned to me that using actors is a big “no-no” in his classes.

We didn’t use actors. There’s a difference between getting an actor to put on a costume and look like the captain of a ship, as opposed to just going out on a ship where I have no control over where anyone’s going. They don’t care about me, they barely let me on the boat!

We didn’t have a lot of control over what we were shooting, so in that instance, what we learned from Brian—shooting reportage style and just filming stuff as it happens—there’re no retakes. There’re no second chances to capture something. If the boat hits one good wave out there, that’s the one that we need to film. But yeah, I don’t know what we did, really; it’s somewhere in between pure reportage filming—cinéma vérité, or whatever you want to call it—and pure, Hollywood fakery.

Interested in seeing the documentary? Watch it online for free here: http://vids.kvie.org/video/2365321356/ 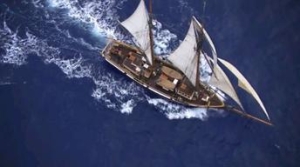